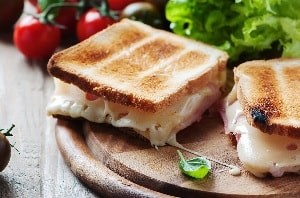 For most people, today is a typical Tuesday, and April 12th is like any other day of the year. For people who know how to live a little, April 12th is National Grilled Cheese Day. Grilled cheese sandwiches are an amazing, hearty and savory favorite across the world.

Grilled cheese sandwiches are a godsend to college kids and busy moms and dads across the world because let’s face it, we don’t always have time to make fancy and healthy dinners. While not the healthiest culinary creation, they’re so beloved that they have their own holiday. Nothing says soul food like a grilled cheese sandwich. Nothing hits the spot on a rainy or hectic day like two pieces of white bread with a couple of pieces of cheese pan grilled in butter with a side of tomato soup.

The History of the Grilled Cheese Sandwich

Melting cheese on bread has been around since ancient Rome; however, it didn’t get popular in western civilization until the 1920s. During the 1920s, sliced bread and processed cheese became staples in people’s cupboards, thus making the grilled cheese an American staple that later took hold in the rest of the world. During the depression, grilled cheeses served as a cheap and substantial meal that didn’t require a lot refrigeration.

While grilled cheeses hit the forefront in the ‘20s, it didn’t truly take off until the 1940s. During World War Two, the government added grilled cheese sandwiches to menus on Navy ships, since Navy cooks could make these protein-packed and filling meals without much preparation. At this time, they were served open face with grated cheese.

In 1949, Kraft singles became a game changer in the history of grilled cheeses. With the convenience of Kraft singles and sliced bread, grilled cheese sandwiches could be even more convenient. However, term “grilled cheese” didn’t come to fruition until the 1960s. Before these sandwiches were called “toasted cheese” or “melted cheese” sandwiches. You can make grill cheeses in a variety of ways, as long as the cheese melts and the bread is crispy. You can throw them in the oven, pan fry them, or pull a Benny and Joon and grill them up with a clothes iron.

Grilled cheese sandwiches are becoming more and more versatile by adding vegetables, using gourmet cheeses, or artisanal bread. Some restaurants execute them better than others. If you’re looking for the best place to get a grilled cheese in Miami, go to Ms. Cheezious Food Truck.

Get Your Fix at Ms. Cheezious

Ms. Cheezious takes the grilled cheese sandwich to a whole new level. They’re passionate about making down-home sandwiches in big ways. They take the innocent flavor of the grilled cheese and elevate it with add-ons, sides, and different cheese flavors.

For instance, take their Southern Fried Chicken Waffle Melt, where they substitute wonder bread with buttermilk waffles, melt some flavorful cheddar, and add southern fried chicken into the cheesy mix. On top of this, they serve it with homemade country gravy and maple syrup. In this marvelous creation, they combine the southern tradition of chicken and waffles with the idea of a grilled cheese – talk about genius. Another clever take on the grilled cheese is their crabby cheese melt, where they melt fresh crab salad made with sharp cheddar cheese on sourdough bread.

The menu at Ms. Cheezious is full of delicious savory creations, in which you can mix and max cheeses and type of bread. They have perfect grilled cheese side items like tomato bisque, turkey 3-bean chili, cheese fries, Gouda mac n’ cheese, and sweet potato fries. You can also get specialty items added to your sandwiches, if you want to kick it up a notch.